A Warrington law firm strengthened its community roots by sponsoring the cider bar at an annual beer festival in the town.

WWCF is the charitable arm of Super League side Warrington Wolves and works to create life changing opportunities for local people through sport, education, health, and the arts.

Proceeds from the event, which has become a favourite with supporters since it launched five years ago, went towards extending the club’s heritage wall, which is used to educate school pupils on the eight-time Challenge Cup winner’s history.

The Wire 2 Wolves Beer Festival celebrates the heritage of the club with it taking place underneath the South Stand concourse, which is where Tetley’s had a brewery.

Alex Mitchell, partner and head of the private client department at Watsons Solicitors, said: “The beer festival was a resounding success and the atmosphere across the two days was fantastic.

“Attendees were able to try a range of tipples, including from a gin and prosecco bar, walk the heritage timeline, and enjoy live music.

“We understand that charities rely heavily on donations from businesses. Watsons Solicitors has a long history of supporting community events and was pleased to sponsor the cider bar and continue our relationship with the Warrington Wolves Charitable Foundation.”

The charitable foundation tweeted its thanks to all sponsors for the important role they played.

Thanks to all our sponsors without you we would not able to have the impact we do on our community #fundraising #workingtogether https://twitter.com/Watsons_Legal/status/1152663408510210048 …

Get on down to @WarringtonRLFC ground for the @WWCLSFoundation beer festival this evening, all for a good cause #heritage #saturdaynight 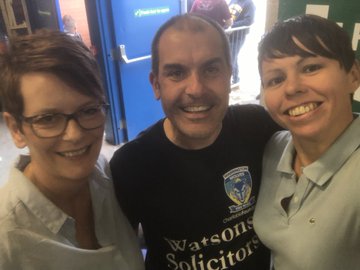 Earlier this year, Watsons Solicitors handed over a cheque for £2,000 to the charitable foundation after pledging to write free wills in exchange for donations.

It also sponsored the shorts of Warrington Wolves centre Ryan Atkins for his testimonial match. As part of his celebratory events to mark 10 years at the club, he raised funds for the Warrington Wolves Charitable Foundation and the Children’s Adventure Farm Trust.

Watsons Solicitors, which has been established for more than 60 years, specialises in family law, employment law, wills and probate, and conveyancing.

Its experienced solicitors each hold accreditations and memberships of professional bodies relevant to their expertise, while the firm’s partners oversee all areas of work.

If you are interested or require any information on any of our services then please get in touch for an appointment on:

Compromise is the perfect solution to flexible working requests

A Cheshire-based employment law specialist believes compromise is the ideal solution to flexible working requests. The goalposts shifted considerably during the coronavirus pandemic with almost half of adults working from home. According to data from the Opinions and Lifestyle Survey (OPN), more than eight in 10 workers who had to do their job from home […]

Ageing population highlights importance of writing a will

A Cheshire-based wills and probate solicitor thinks that there is no time like the present for getting your affairs in order and writing a will with the age of the population on the rise. Recently released figures from the Office for National Statistics (ONS) revealed that the number of people in England and Wales aged […]

Lauren Soutar marked her one-year anniversary at Watsons Solicitors by taking a significant step closer to acquiring the Law Society’s Children Law Accreditation. Tuesday 18 October was exactly one-year since Lauren joined the Warrington-based firm as a family lawyer. By the time that date came around, Lauren had undertaken the Children Law scheme’s mandatory three-day […]

Hannah Dale and Watsons Solicitors are celebrating after the trainee was shortlisted for the Apprentice of the Year honour at the prestigious Warrington Business Awards. Hannah is on the three-strong shortlist for the award which is open to any individual who has undergone a full-time training position during the period from January 2020 to September […]